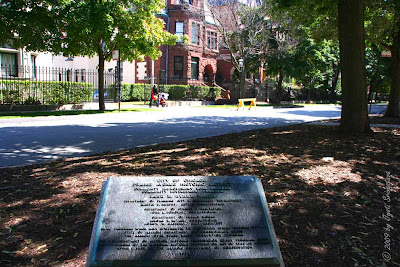 These surviving residences are representative of the range of style and fashion that lined the street during it's heyday in the late 19th century .. In addition, the Second Presbyterian Church, attended by many of the Prairie Avenue families, stands as the lone survior of the religious history of the community ...

The history of Prairie Avenue is closely linked to that of the City of Chicago for nearly 200 years .. The battle of Fort Dearborn took place on August 15, 1812 along the Lake Michigan shoreline in this general vicinity.

Site of the battle of Fort Dearborn ..
The site was marked for over a century by a large cottonwood tree, dating to the time of the massacre... After the tree died, it as replaced by a bronze statue commissioned by George Pullman in 1893 .. the monument was removed in 1931 ... Now this plaque marks the site of this pivotal event in Chicago's early history ...

Apart from Clarke House, other buildings that make-up for the Landmark Prairie Avenue Historic District include ..

William W. Kimball House ..
Address: 1801 S. Prairie Avenue ..
Architect: Solon S. Berman
Completed: 1892 ..
This imposing Chateauesque-style home with elaborate stone-trim and mansard roof was built for the owner of Kimball Piano & Organ Company .. it now serves as the headquarters of the U.S. Soccer Federation [along with the next-door Coleman House] ..

This brown sandstone residence built for the owner of a hardware company now serves along with Kimball House, as the headquarters of the U.S. Soccer Federation ..

Elbridge G. Keith House ..
Address: 1900 S. Prairie Avenue
Architect: John W. Roberts
Completed: 1870
The last surviving example of the Second Empire style on the Prairie Avenue. This was one of the several homes on the street occupied by members of Keith family ...


REF:
# Prairie District Neighborhood Alliance .. click here ..
# Most of the information is from the pamphlet available at the Glessner House Museum .. titled .. Walking Tour Guide, Prairie Avenue Museums and Gardens ..
Posted by Jyoti at 9/04/2009 07:33:00 AM