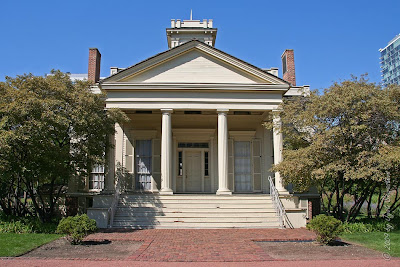 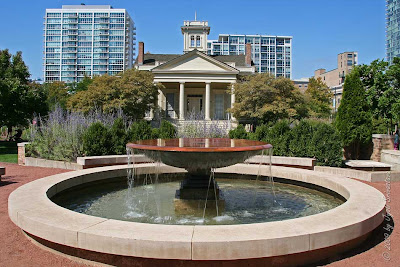 The plaque reads:
Chicago Landmark
Henry B. Clarke House
Known as the Widow Clarke's house, this is Chicago's oldest building and it's only surviving example of of the Greek Revival style fashionable in the early 1800's. Designated a Chicago Landmark on October 14, 1970, by the City Council of Chicago.
Richard J Daley, Mayor ..
Commission of Chicago Historical and Architectural Landmarks ..

History ...
Henry and Caroline Clarke came to the growing prairie town of Chicago from New York State to seek fortunes ... They built their house on 20 acres of land at the present day 16th Street and Michigan Avenue in 1836, one year before the City of Chicago was incorporated.... Mr. Clarke supported his family of six children by trapping, hunting, farming, selling dairy products and serving as City Clerk until he died of Cholera epidemic in 1849. Mrs Clarke sold some of the land to support the family and finish building the house.

The house has moved twice:
# In 1872, the Clarke children sold the house to John Chrimes. He moved the house to Wabash Avenue and 45th Street, away from the dirt and noise of the city. In 1941, his granddaughters sold the house to Bishop Louis Henry Ford and the St. Paul Church of God in Christ. The church used this house as a parish hall, parsonage and community center. In 1977, the City of Chicago purchased the house.
# In 1977, the City moved the house to it's present location in the Prairie Avenue Historic District, close to it's original location. The house had to be lifted over 'L' tracks. The house was raised on hydraulic jacks and on Dec 4, 1977, one minute before midnight, all train services were stopped, while the house was pulled across the tracks. Thereafter the house was set on a new foundation and restoration began at its current location. 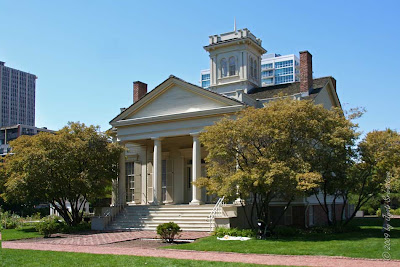 Architecture ..
The house is built in the Greek Revival Style, which was popular from 1820 to 1860.
It has the common characteristics like:
- overall cubic form
- classical Greek ornament, such as columns
- gable roofs combined with pediments Entry porch, a large portico supported by tall columns and s well-proportioned pediment define the facade of the house .. The simple columns are based on the Roman Doric order.
The Italianate style cupola was added lated in the 1850's. 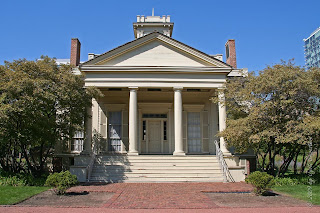 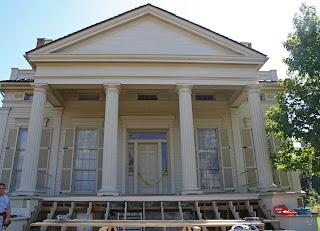 The two images here show the symmetry beween the east and west facades ... 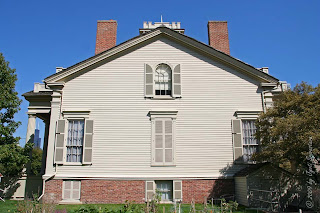 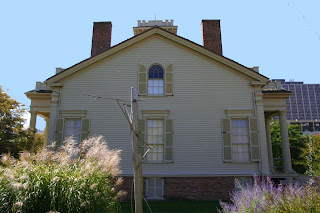 The two images show the symmetry between the south and north facades ..

# The National Society of the Colonial Dames of America in the state of Illinois, undertook the refurbishing of the interior. The dames continue to be an important partner and supporter of ongoing collections and programs at the Clarke House Museum.

# The source of information here is the brochure avialable at the Clarke House Museum ..