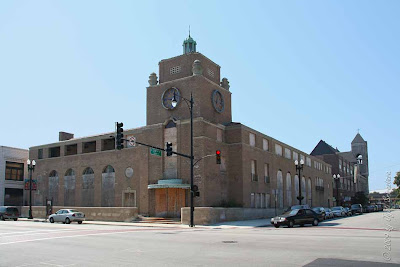 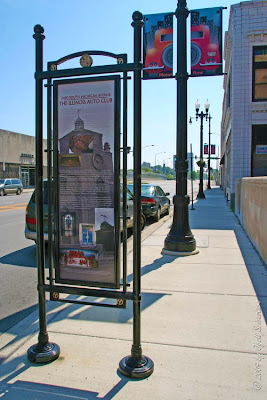 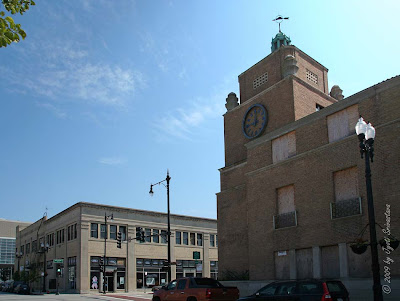 Thanks to the marker, I could find some information on this building ...
It reads ..

"The 2400 South Michigan Avenue building located within the Motor Row Chicago Landmark District, is significant for its original use as an exclusive automobile club and its later use as the headquarters of a nationally significant newspaper. Philip Maher, the son of George Maher and a noteworthy architect in his own right, designed the building in 1936 as the Illinois Automobile Club [IAC]. Built in a Modern-style adaptation of the Spanish Mission architectural style, the building has a visually striking corner clock tower. When built , the building housed, along with club meeting room and offices, a basement fitness center and an Olympic-stze swimming pool, plus a private residence on the third floor. This club, for early automobile owners, reflecting a time when automobile ownership was not widespread, was one of the last auto-related building constructed in the Motor Row.

The Chicago Defender newspaper acquired the building in the 1950s. The newspaper operated out of this, its third location, for nearly five decades, before relocating to a new facility in January, 2006. The Chicago defender was founded on May 5, 1905, by Robert Abbott, and was the nations most influential black weekly newspaper by the advent of World War I. Using journalism techniques similar to those used by William Randolph Hearst and Joseph Pulitzer, the newspaper began to attack racial injustice head-on.

The Defender's civil-rights efforts are epitomized by its coverage of the murder of Emmett Till in 1955. No other story published by the Defender galvanized a community more soundly than that of a fourteen-year old boy from Chicago, who was beaten to death for allegedly whistling at a White female in Mississippi. The jury trial of the two white men accused of the crime was a farce and drew international attention when newspapers like the Defender refused to let the story die.

In 1940, John H. Sengstacke, Abbott's nephew and heir, assumed editorial control and further expanded the circulation of the newspaper. Sengstacke founded and became the first president of the National Negro Publishers Association now known as National Newspaper Publishers Association. The Defender was the first black newspaper to have a circulation over 100,000, the first to have a health column and the first to have a full page of comic strips. On February 6, 1956, the Defender became the Chicago Daily Defender, the largest black owned daily in the world ..

Who current is the title holder for this property?