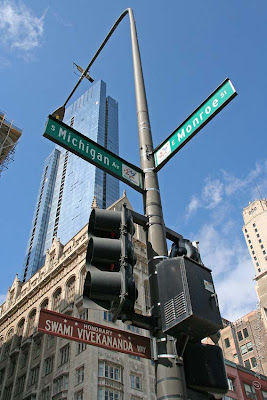 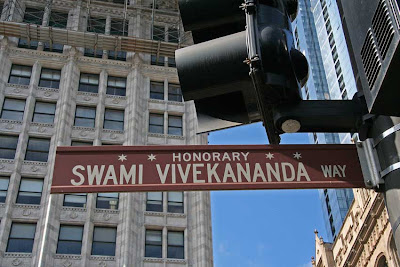 Swami Vivekananda at..
The World Parliament of Religions
September 11, 1893, Chicago..
Sisters and Brothers of America,
[The 7,000 people in the audience, according to reports, “went into inexplicable rapture with standing ovation and clapping that lasted for more than three minutes.” He went on...]
"It fills my heart with joy unspeakable to rise in response to the warm and cordial welcome which you have given us. I thank you in name of the most ancient order of monks in the world; I thank you in the name of the mother of religions; and I thank you in the name of millions and millions of Hindu people of all classes and sects.

My thanks also to some of the speakers on this platform who, referring to the delegates from the Orient, have told you that these men from far-off nations may well claim the honor of bearing to different lands the idea of toleration..."

The World Parliament of Religions was sponsored by the Unitarians and Universalists of the Free Religious Association, and was a part of the greater Columbian Exposition held for several months in 1893, in Chicago, which was attended by over 27 million people.

A very interesting read ...
His [Swami Vivekanand's] passage across the Pacific from Japan was paid for by friends in India, who, having no idea of the cost of living in the New World, provided him with only enough to get him here, and nothing on which to live. He came via Vancouver, B.C. and made his way to Chicago only to find that he was too early. Several weeks would elapse before the Parliament opened. In the meantime he managed with the help of generous strangers to spend this time in New England, in the homes and summer homes of some very distinguished people...
# Continue reading.. Swami Vivekananda at the Parliament of Religions.. click here ..