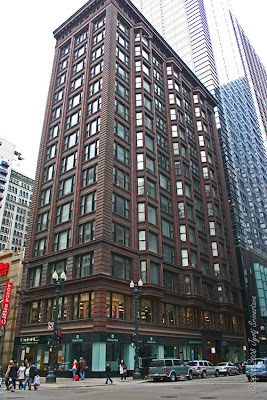 The plaque reads..
Chicago Landmark..
Chicago Building
Holabird & Roche, architect
1904-05
The building epitomizes the Chicago School, a design movement that changed modern architecture. It's distinctive features include large windows, steel-frame construction, projecting bays and ornate terra cotta cladding. Located at what was known as the "World's Busiest Corner", it's prominence was further heightened by a jog in the alignment of State Street.
Designated on March 26, 1996
Richrad M. Daley, Mayor
Commission on Chicago Landmarks..

A typical example of Chicago School of architecture with ...
- large "Chicago windows"
- metal-frame construction
- distinctive bays
- terra cotta cladding
The building is a critical component of a grouping of significant structures, which includes, Carson Pirie Scott and the former Mandel Brothers Store, at what was once labeled the "World's Busiest Corner."
REF: Chicago Landmarks: Chicago Building ..
Posted by Jyoti at 1/12/2009 07:16:00 AM