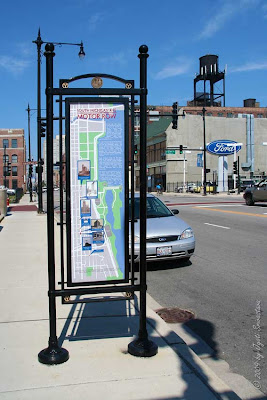 In the early 20th Century, South Michigan Avenue was the heart of splendor in regard to homes, wealth, worship, leisure and shopping. South of the Chicago Loop was the only place for the most wealthy, best educated and modern families, whose homes bounded Prairie Avenue, just east of Michigan Avenue.

St. Luke's Hospital, Second Presbyterian Church and Central Railway Station were built with the community's desires. The World's Columbian Exposition of 1893 laced through the area further enriching the surrounding and further establishing Chicago's place among first-class cities. The Burnham Plan for Chicago's Lakefront presented the final framework for Michigan Avenue with parks, statues, fountains and museums.

South Michigan Avenue has also been home to the Metropole and Lexington hotels, Chess Records, Chicago Defender and to many car manufacturers in the world. At it's peak as many as 116 different makes of automobiles were sold on Motor Row, housed in elaborate, almost palace-like showrooms, many of which remain today.

This group of commercial buildings here on the Near South Side of Chicago is considered to be the largest, intact early automobile row in the United States. The use of these structures have not diminished. Commercial and retail spaces has given way to residential dwellings. People who want to be close to the downtown area have moved into lofted apartments and condominiums, reinventing .. 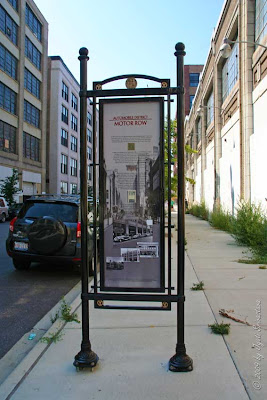 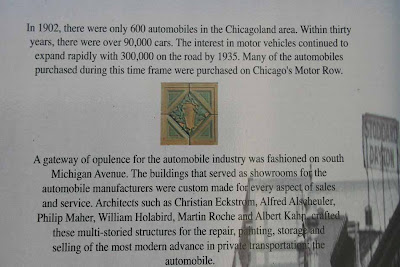 Another marker reads ..
Automobile District Motor Row
In 1902 there were only 600 automobiles in the Chicagoland area. Within thirty years there were 90,000 cars. The interest in motor vehicles continued to expand rapidly with 300,000 on the road by 1935. Many of the automobiles purchased during this time frame were purchased on Chicago's Motor Row.

A gateway to opulence for the automobile industry was fashioned on south Michigan Avenue. The buildings that served as showrooms for the automobile manufacturers were custom made for every aspect of sales and service. Architects such as Christian Eckstrom, Alfred Alscheuler, Philip Maher, William Holabird, Martin Roche and Albert Kahn crafted these multi-storied structures for the repair, painting, storage and selling of the most modern advance in private transportation: the automobile.

This group of commercial buildings here on the Near South Side of Chicago is considered to be the largest, intact early automobile row in the United States. At it's peak as many as 116 different automobile manufacturers were represented within several blocks of downtown Chicago. Ford, Fiat, Buick, Cadillac, Pierce Arrow, Locomobile, Marmon and Hudson, to name a few, were displayed for the cunsumer's pleasure. The excitment and pulsating atmosphere was matched only by the smooth ride and shiny exterior of a brand new motor vehicle.

Today, the neighborhood is on an upward swing poised to become one of Chicago's cultural and entertainment centers once again. High-end resturans, retail spaces, and residential units are adding new life to these historic buildings, thereby producing a new neighborhood with character and quality. 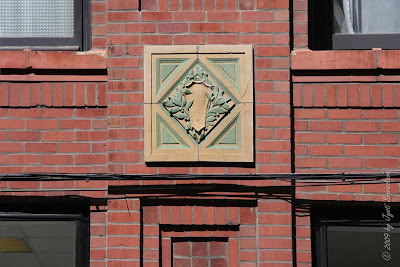 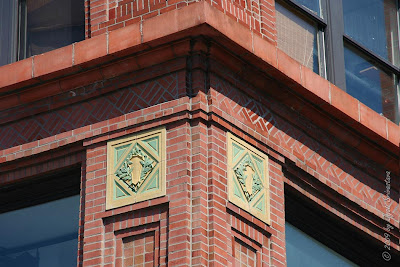 A query ..
Any idea what this motif seen on the marker stands for??? ..
It can be seen on the terra cotta facade of Thomas Flyer Garage & Service Building ..
Address: 2255 South Michigan Avenue .. 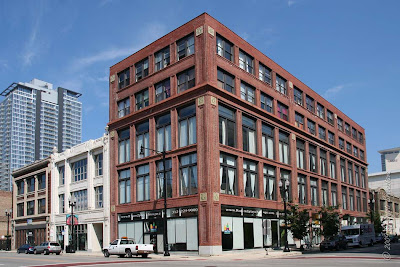 As usual, your picture stories are breathtaking. Grew up in Chicago burbs myself, but never knew about this area, probably because it was very depressed and sketchy all those years ago. Like you, I love that these exquisite buildings are now being treasured, but am disappointed at the recent street and sidewalk improvements around them. Chicago has a worldwide rep as a green city because of all the care and funding given to trees and landscaping. But you wouldn't know it from this historical area.

Seems that about 90% of all the open space is given over to cars (ironic, right?). The sidewalks are a narrow joke and they make the problem worse with the placement of the street lights and interpretive signage.

The civil engineering here is pure old school. According to this dogma, the purpose of streets is to move the highest volume of vehicle traffic in the quickest time. Think how a more enlightened designer could have eliminated the left turn lanes and installed a continuous wide green median, capable of growing some big trees. The little lollipop trees they planted in the tiny sidewalk pits will never get very big. The sidewalks could have easily been widened too. And let's not forget about bikes. It's also depressing that the only viable economic solution for a place like this is to import "high end" lifestyles, but that's an entirely different topic, right? Thanks. Kim

Hi KIm,
Thanks for taking out time to write down your thoughts here. I sincerely appreciate.

I really have not given too much thought about the viability of wide green median ..Now that you have written about it, it sounds interesting. Although planning would be a huge challenge, with landmark structures on both sides of the road, there are hardly any possibility of street widening ... also one needs
to consider the increased traffic
flow as this area gets more residential building.

Athough quite nearby in Bronzeville, the Matin Luther King Jr. drive has beautiful streets with really wide median that has some huge trees.