In the Motor Row Historic District, I saw not only beautiful automobile showrooms [now converted into loft condominiums] .. but also many cultural hallmarks that reminds of it's proximity to the elite Prairie Avenue Historic District .. and also it's growth as a blue collar settlement .. 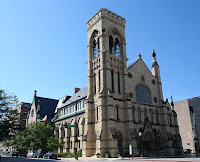