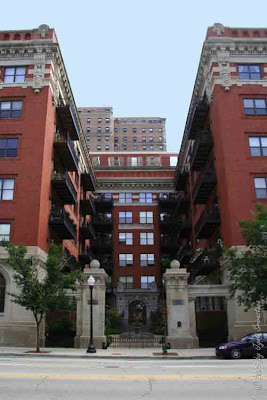 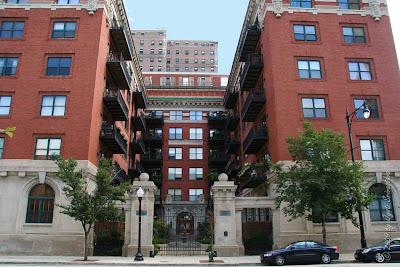 A marker reads ..
"St. Lukes Hospital ..
20th Century Healthcare ..
The extraordinary history of hospitals in the modern world is founded in the needs of the poor. Prior to modern times or the "the period of Enlightenment" [1800 to present] hospital care was driven by the need to separate the afflicted indigent from the wealthy. Patients of means were kept at home and those in the practice of medicine would conduct all the necessary tasks at the patient's bedside. Even operations were done in the family home. Poor patients were kept in a separate facilities often run by charitable organizations that could only administer nominal care. Often these institutions were overcrowded places for the homeless, mentally diminished and incapacitated. They were not what people today would call a hospital. During times of plague, patients were separated from the community or locked into their homes. Outbreaks of Chorela, small-pox and scarlet fever were common in large cities with inadequate housing. The threat of an uncontrolled epidemic prompted Chicago officials to provide various facilities on the edges of the city. But advances in medicine and technology quickly turned the tide of warehousing the sick, to healing in a controlled germ-free environment with the use of modern instruments and surgical units.

Grace Episcopal Church was a Chicago institution that saw its mission to provide a place to heal the sick. Reverend Dewitte Clinton Locke led the congregation to start a hospital. In 1864, they hired Dr. Walter Hay to organize St. Luke's Hospital in a small frame structure at the 8th and State Streets. Walter Hay's primary interest was neurology. private Sanatoriums for "nervous patients" were built not only to provide care outside the home, but also to study the patients. These private institutions catered to those who could afford the best of care and modern medical advances. The medical needs of these patients went outside of the practice of neurology prompting specialized and general care for hospital clientele. Embracing this need, St. Lukes evolved into a large institution and relocated in this area. Eventually, architect Charles Frost was engaged to design a first class facility. Known primarily for his railroad commissions of depots and office buildings, Frost seemed an odd choice. In 1908, the building was completed just beyond the backyards of the wealthy homes lining Prairie and Indiana Avenues. The heavy facade of the first level is reminiscent of 19th century architecture of England sans the beautiful arched windows. The double towers are joined by a setback with a massive masonry and wrought iron frontgate that seem to engulf the public parkway. Natural light poured in from the large windows illuminating wards and the eighteen-foot ceiling height of the operating room on the top floor. The chapel was gifted with stained glass windows, wood benches and a peaceful elegance of material and decorative finished.

In 1996, the structure went through a major conversion into residential living. Current residents enjoy the original beauty, grandeur of the structure, but can now enjoy the sunlight from their courtyard balconies in the renamed site Trevi Square ..
Posted by Jyoti at 9/09/2009 06:42:00 AM

I love Chicago courtyard buildings. Unlike many modern buildings, which leave green space around themselves (which is often spread to thin to use), this type of building pushes itself to the lot lines and preserves a wonderful space on the interior of the block. This arrangement is also very efficient for daylighting because it keeps the wings of the building thin enough for natural light to reach the deepest part of each unit. Gotta love the beauty and practicality of it!

Point well made. Gotto love the beauty and practicality of courtyard buildings.

This is the desired effect for any condo living. We recently purchased here at trevi square and recieve tons of natural light along with reduced heating and cooling because of the thick exterior walls. The location is excellent for working in the loop the Michigan ave address is an eye catcher too.

I think this is a wonderful building, but then I was born in this building in 1951!

Thats wonderful to know you were born here. Thanks for sharing.

If only I knew your name and /or email ID, it would be even better.

uIn the late 40s, I visited St Luke's where my grandmother was a nurse. She was originally from Canada where I live.

My mother was born in this hospital in 1917 but sadly her father died a few months later and her mother brought her back to Scotland,her name was Jeanette Wells.

humgoviI spent many an afternoon in the doctors lounge waiting for my father to finish making his rounds in the hospital. I remember the large portraits of doctor's hanging on the wall and the brown spring chairs in the room. We as kids had fun bouncing in them. If any one can tell me the names of the doctors who's portraits were on the wall, I would like to know. My father's name was Rigby C. Roskelley, MD. In fact I spent many days in this hospital as a child with a fractured skull and what was diagnosed then as polio, which I recovered from with out any lasting effects. Other doctor's which I believed were on staff were: Dr. Guy Pontius, Alfred Biggs, and Leon Witkowski. If any one has pictures of the doctor's lounge I would love to get copies. My email is : davidroskelley@gmail.com

I was diagnosed with scoliosis by Dr. Claude N. Lambert who began my initial treatment in this hospital. I've never forgotten him and the eventual spinal fusion he performed at Presbyterian St.Luke's in 1958. I have fond memories of the original St. Lukes. My email is barbjoritz@gmail.com

I was born in this building November 1950. Delivered by Dr. George Finola. I recently returned to the Chicago area and would love to reside in this neighborhood. I am a retiring NICU nurse. I find the history fascinating and the fact the building is still standing. Love it!