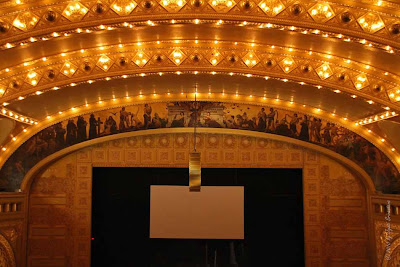 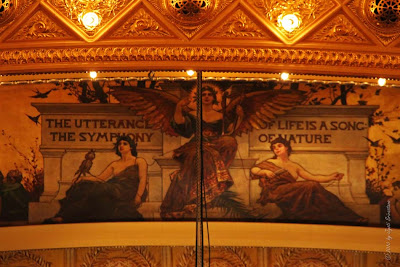 “The utterance of life is a song, the symphony of nature.”

Proscenium Arch Mural..
Designed by Charles Holloway..
Healy and Millet had organized a competition, in which hundreds of participants entered includining Louis Comfort Tiffany. And Charles Holloway was selected. He was only 29 years old at the time..

At the apex of the mural, rests the words: “The utterance of life is a song, the symphony of nature.” Holloway's design represents humanity at different stages of life through song: the past, or the “Song of Sorrow”; the present, the “Song of Joy”; and the future, the “Song of Hope.” This mural is meant to be viewed from right to left (south to north).

Among the 40 life-size classical figures are (starting at the far right): An angel before a bright fire symbolizing birth and inspiration; groups of joyful dancers; a male receiving a garland from a woman; a mother with a baby at her breast; a young child riding on a tiger's back; and youthful lovers. At the center of the proscenium's mural are three figures representing the present, the past and the future. The left side of the arch depicts images of sorrow and death: a philosopher with one hand on a skull; a grieving woman; a young man holding a dying companion; a daughter at the feet of her aging mother; a cross; a group of monks; the angel of twilight. 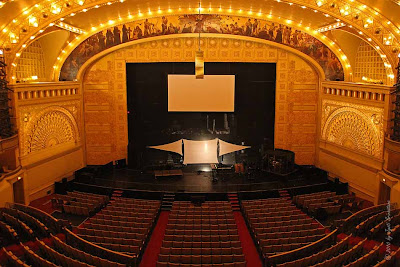 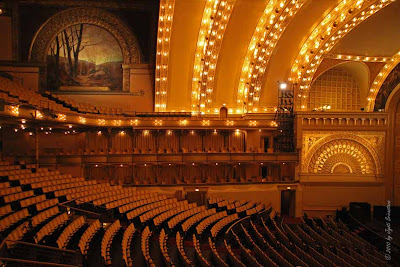 Murals: North and South Walls..
Designed and painted by Albert Francis Fleury [1848-1924]..
These continue the theme of nature, depicted in the mural over the proscenium. the words are from a poem written by Sullivan with title, "Inspiration"..
The south mural:
The inscription reads: “O, soft, melodious spring time! First-born of life and love”
The north mural:
The inscription reads: “A great life has passed into the tomb and there awaits the requiem of winter’s snows.”
Posted by Jyoti at 7/29/2010 04:31:00 AM

Sitting in the Auditorium Theater now enjoying the Jeffrey Ballet, intermission. Thank you for the mural history of this beautiful theatre