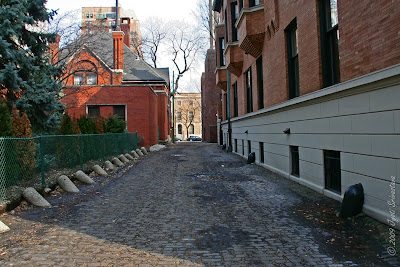 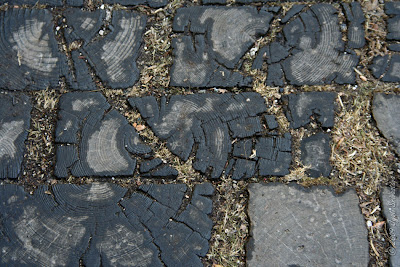 A reminder of the days when the streets of Chicago were paved with wood blocks and covered with tar ... which led to the fact that "streets were burning" during the Great Chicago Fire of 1871.

The Gold Coast Wooden Alley is one of two remaining wood block alleys in the city; the other is on the 2100 block of North Hudson Avenue ... 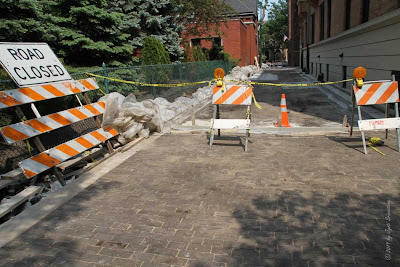 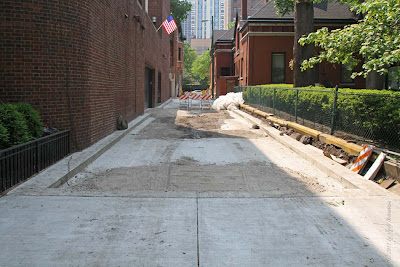 Woodblock Alley now gone replaced with brick and concrete..
The woodbloack alley has been torn away.
It happened someday in the end of May 2011.

Glad you found the wood block alley. It has intrigued me for years.

Thanks for your comment ... and I am glad this photo could meet your curiosity ...

Were these wooden block alleys pre Chicago fire, or post?

i have a hunk of this alleys wood !!
i was walkin to my truck after work and there it was .. :)

They just tore this alley up yesterday -- I'd love to know why the city tore up something as old and historic as this...

Tore up the alley?
That's awful!
Why would they do so?
I would love to know that too

There's a plan for restoration of the wood block alley. Good to know it's begun.

The City is in the process of restoring the wood block alley. The existing wood blocks that are still usable will be reset in an area adjacent to State Parkway. The remaining area will be replaced with new wood block pavers. Due to new environmental regulations, the new pavers will not be creosote treated and then covered with tar. The new wood blocks will new manufactured form a naturally pest resistant species that will not require preservatives.

WHAT? The alley was a piece of Chicago's history. It predated the Great Fire of 1871. I am from Ohio and searched the alley out to take pictures of it. What happened to the wood blocks?

I enjoy reading about historic alleys and streets with Wood Block. My family has been in the wood block business since the early 1940's. We manufactured the new Black Locust blocks for your wood paver alley. Congrats to all those who made it happen, and we're proud to be a part. Norm Kaswell (www.kaswell.com)