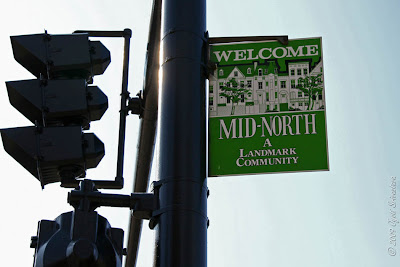 At the intersection of W Grant Pl and N Sedgwick St..
this plaque reads ...
"Chicago Landmark
Mid-North District
This area, with its concentration of brick rowhouses, is typical of urban residential communities developed during the last three decades of the 19th century. The high quality of it's architecture, well-preserved and well maintained, gives the Mid-North District, it's distinctive character.
Designated a Chicago landmark on August 31, 1977
by the City Council of Chicago.
Michael A Bilandic, Mayor.
Commission on Chicago Historic and Architectural landmarks."

A marker at the intersection of W Fullerton Pkwy and N Cleveland Ave reads ..
Mid North District..
The streets feature a cross-section of architecural styles and building types from the late 19th-century, including pre-Fire of 1871 wood cottages, Italianate-style rowhouses and masonry residences designed in Queen Anne and Richardsonian Romanesque styles.

While the residences from the 1870s were designed in an Italianate style, with elaborate cornices and window surrounds. The Queen Anne style, with its variety of colors, textures, and details, later gained popularity in the district, followed in the 1880s by the rough-faced stone buildings of the Romanesque Revival style.

I have always liked this building [310 W Dickens Ave] at the intersection of N Clark Street and W Dickens Ave.. Wonder if this cow is from the Cow Parade in Chicago?

Site of St. Valentine Day massacre..
2122 N Clark street is the site of the infamous Valentine day massacre when seven members of the Bugs Moran gang were line and killed, supposedly by members of Al Capone gang.
# For more.. click here..
Posted by Jyoti at 2/18/2009 08:44:00 PM

My grandparents bought the Bellinger Cottage at 2121 N Hudson (the called Lincoln Place) circa 1910 and owned it until the mid-1950s. My mother was born there in 1916.

I am now living in the Bellinger cottage. I am curious about its history. Someone (unidentified) posted that their grandmother lived there. Who lived there? Did they purchase fro the Bellinger family?