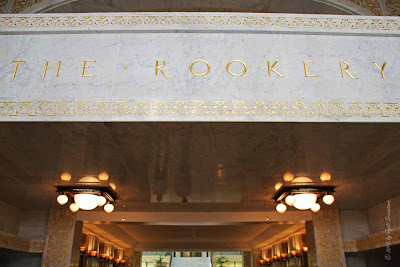 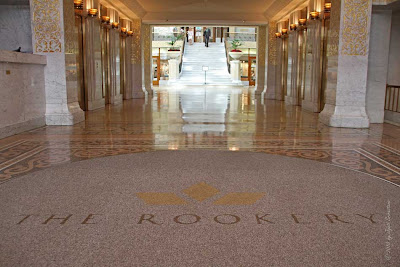 A marker in the lobby informs..
In 1988, L. Thomas Baldwin III purchased The Rookery and set out to completely restore the landmark by preserving it's historic grandeur, while also adapting to modern day technologies. The restoration combined the original architecture of John Root and Frank Llyod Wright and added a 12th floor to the top of the building.

A major decision for the team was determining the era to which The Rookery would be restored. Returning to Roots original design would have required a great deal of conjecture. There are good forensic and photographic evidence to restore much of Wright's work. The architects selected a hybrid approach.

The lobbies were reopened and reconstructed to the Wright era appearance, combining Root's volume with Wright's staircase. To achieve this, the architectural team projected old photographs and consulted the same pattern book that Root and Wright would have used. The architects also restored the Light Court's glass ceiling, protecting it and the light well by installing a new skylight roof. 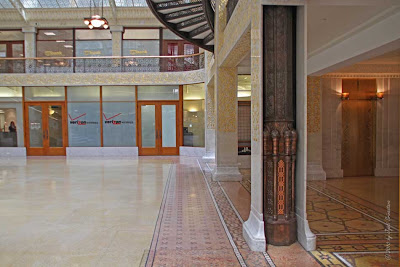 In the restoration, the architects discovered Root's original ironwork encased in the marble columns and left open for visitors to compare. [Above images]

One important aspect of the recovery was Burnham & Roots former offices on the eleventh floor. the space has undergone many changes and suffered a great deal of abuse. The library was restored with meticulous attention to details, including the fireplace, wood panels, bookshelves and even custom-loomed rug to match the original.

"Complete at last, Chicago's restored Rookery Building sets the standard against which all future commercial renovations must be judged".
- Robert Bruegmann..
"Preservation Touchstone"!