The Elks National Memorial: Entry to the Grand Reception Hall 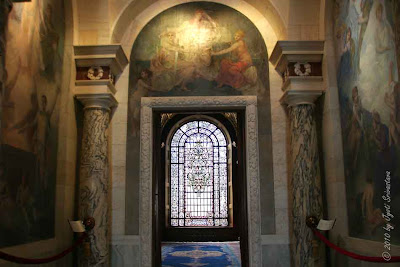 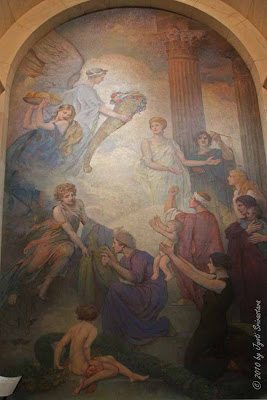 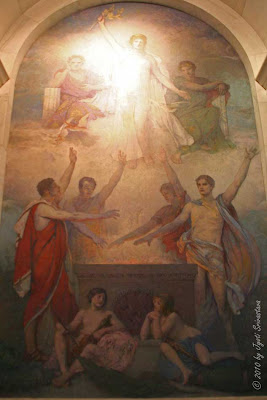 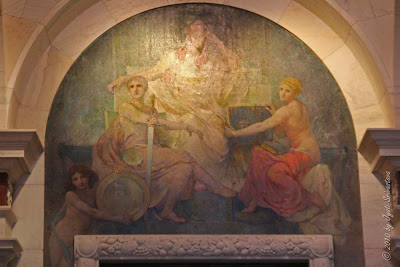 
Charity.. [North]
By - Edwin Howland Blashfield..
The topmost figure symbolizes abundance. A gull with loaves and gull with cloth are angelic characters bringing food and raiment to be distributed to the worthy and the needy. Center figure (arms outstretched) is the Spirit of Charity who recommends these people as worthy of the gift of mercy. Figures at lower right represent those in want, the worthy and the needy. A girl with scales (upper right) symbolize justice, equality and fairness. The mother with child in outstretched arms is emblematic of the desire of the human soul, from the beginning of life to reach that, which rises above or is unobtainable. The child in the foreground symbolizes curiosity...


Fraternity.. [South]
By - Edwin Howland Blashfield..
Four male figures represent manhood, swearing by the everlasting fire of life, to remain united forever in brotherhood, in need or in prosperity, are symbolic of brotherly love or fraternity and thought to be suggested by the legend of the old Athenian oath. In the mural at right, the central figure depicts the Spirit of Brotherly Love. The figure at left symbolizes power, resting arms on Roman fascia, emblematic of union. The figure at right symbolizes wisdom. Doves represent love and peace. Children with musical instruments in the foreground are emblematic of harmony...

Justice.. [East]
By - Edwin Howland Blashfield
The center figure is that of Justice, neither blind nor blindfolded but with eyes wide open. Justice is flanked on each side by her handmaidens, the maiden holding the book of the law represents fidelity. The second maiden holds the scales of justice on her lap and bears the two-edged sword of truth. The small maiden holds the mirror of introspection. This scene represents justice tempered with brotherhood.