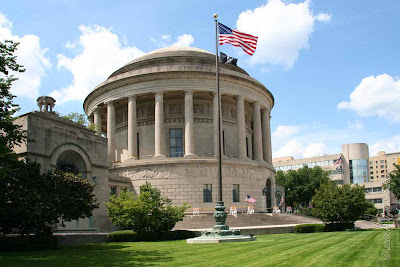 
The plaque reads..
Chicago Landmark
Elks National Memorial Headquarters Building
1924-26
This building was constructed by the Benevolent and Protective Order of Elks, an American Franternal Organization, in tribute to 1,037 Elks who died and 70,000 Elks who served World War-I, to whom it was dedicated on July 14, 1926. Known as the Elks Veterans Memorial, it has been rededicated to succeeding generations of America's Veterans. Its Roman-inspired dome, grandly scaled colonnade and distinctive friezes enclose an ornate interior adorned with allegorical murals and sculptures embodying noble and humanitarian ideals.
Designated on October 1, 2003
Richard M. Daley, Mayor
Commission on Chicago Landmarks..

This Memorial has so many remarkable features that it's difficult to cover them all..
Here are some of the outstanding features...


Reclining Elks..
By Laura Gardin Fraser
Two life size reclining elks flank the steps in front of the Elks National Memorial, where the steps where they meet the sidewalk.. There are two more of her sculptors in the Memorial, "Earth" and "Air". Sculptor Laura Gardin was born in Chicago and was married to another well reputed sculptor James Earle Fraser..
# For more.. click here..


Sculptures "Fraternity" and "Patriotism"..
By Adolph A. Weinman..
The image here is of "Fraternity"..
Adolph Alexander Weinman was a German born American sculptor. He was a famous architectural sculptor who worked a lot with architects McKim, Mead, and White. The beautiful freize on the exterior walls of the building is also by Weinman.
# For more.. click here..


The Triumphs of Peace Endure, The Triumphs of War Perish..
By Adolph A. Weinman
The remarkable frieze on the facade is on the theme of war and peace.. It extends on either side of the front door. It brings out the pain and suffering of war and the bounty of peace..
# For more.. click here..


The Rotunda..
As I entered the Memorial, I was overwhelmed by the "WOW" feeling. There is a lot to admire.. heroic sculptures, allegorical murals, carved ceiling, marble columns, brass work and hand-painted windows.. I had to cover the Rotunda in seperate posts..


The Rotunda: Heroic Sculptures..
representing.. Brotherly Love, Fidelity, Justice and Charity..
By James Earle Fraser
These are the cardinal virtues of the order of Elks...
Murals..
By Eugene Francis Savage..
Diectly above the sculptures are murals representing Army, Air Force, Navy and those who do not fight, but assist in other ways..
# For more.. click here..


Rotunda: Upper Rotunda Murals..
By Eugene Francis Savage
These allegorical murals are on various themes.. There are the Order of Elks symbol bearers, "Brotherly Love”, "Charity”, Fidelity” and "Justice".. and murals based on sermons like "theirs is the kingdom of heaven"..
# For more.. click here..


Entry to the Grand Reception Hall..
There are three murals.. Charity, Fraternity and Justice..
By Edwin Howland Blashfield..
He is famous for creating large works of a historical or allegorical nature..
# For more.. click here..


The Grand Reception Hall..
As if the Rotunda was not enough to wow anyone, there's the Grand Reception, with heat sensitive light that switches on as soon as one enters the place.. and lo and behold, one is overwhelmed by beauty! A masterpiece in rare woods, palacial Oriental rugs and unique fine furnishing Again it would take more than one post to cover this place..
# For more.. click here..


The Grand Reception Hall: Hand-painted glass windows..
I was told that these are not stained glass windows, but hand-painted. However I have no idea of the themes of these painting.. I did spot the familiar angels and cherubs and bald eagles..
# For more.. click here..


The Grand Reception Hall: Ceiling murals..
Although many of the allegorical murals have been elaborately described on the Elk Memorial website and the brochure provided at the place, there is complete lack of any description about the ceiling murals..
# For more images.. click here..


The Grand Reception Hall: Wall Murals..
By Eugene Francis Savage
There are two allegorical murals.. "Paths of Peace" and "The Armistice".. The themes are been well elaborated with markers.. Like The Dove, Olive Branch and Rainbow fill out the scene, indicating Promise of a New Peace...
# For more.. click here..

Thx 4 the photos, wow indeed. Saw this monument on WTTW.

I'm working on the description for the ceiling murals, but, briefly, they represent "the feast on Mount Olympus". Nice work.