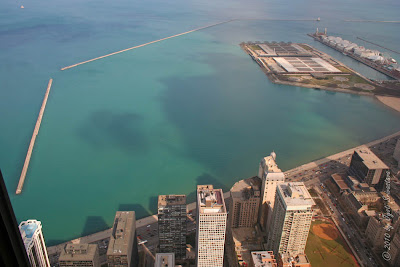 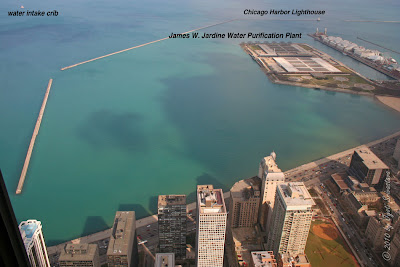 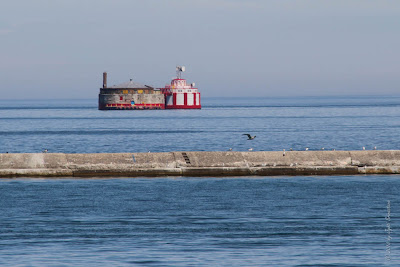 Water Intake Cribs..
This is the Harrison-Dever Intake Crib, and is actually composed of two interconnected buildings. The older of these two structures, built in 1900, is the Carter Harrison Crib. In 1935, William E. Dever Crib, was completed. The Harrison-Dever Water Intake Crib provides water to the city of Chicago by pumping it through a 20 foot diameter tunnel that runs 200 feet below the lake's surface and connects the water crib complex to the James W. Jardine Water Purification Plant, located just north of Chicago’s Navy Pier.

The Harrison-Dever Intake Crib is often called the “Two-Mile Crib”, as it is located two miles off of the Chicago's lake shore. 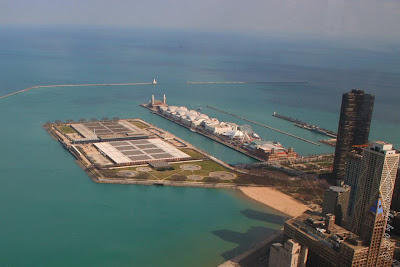 James W. Jardine Water Purification Plant..
The Water Intake Cribs supplies water to the Jardine Purification Plant. The plant processes nearly one billion gallons of water on an average day. That Jardine Plant, along with the South Water Purification Plant, serves nearly five million consumers in the city and 118 outlying suburbs.
The filtration process takes up to seven hours to complete. During the process water passes through a number of steps, including chemical treatments at various stages. Several additives, like carbon, chlorine, and fluoride, are added to the water in the plant's intake basins. Chlorine, whose job is to kill pathogens, is added at multiple points throughout the process. Fluoride is an additive to prevent tooth decay. The final steps of the purification process include traditional filtration, using gravel and sand. Processed water is delivered to the city of Chicago and suburban areas by means of pumping stations. To ensure safe drinking water, the plant drains and cleans the intake basins each spring. 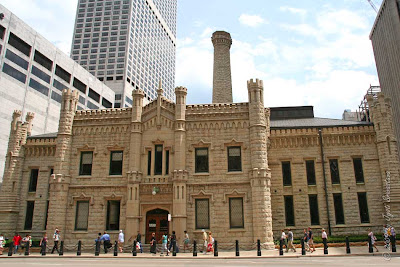 The Chicago Avenue Pumping Station..
It is a part of the historical Water Tower complex located on the north Michigan Avenue..It was erected in 1869 to equalize pressure and keep water flowing smoothly from taps. It survived the Great Chicago Fire of 1871, and became the first American Water Landmark upon its centennial anniversary in 1969. 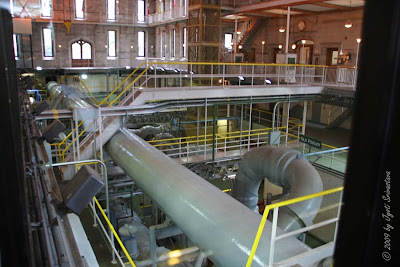 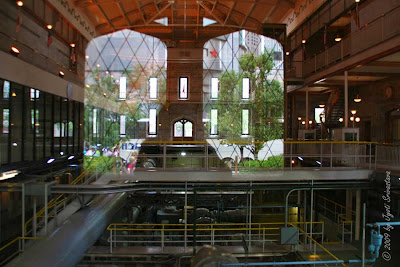 Fantastic! It's a good news.. uhm we have a water filer system on our home from the 70's where water comes from ground into coal, then rock then coarse sand, thinner sand then super thin white sand then into the house.... where is your smaller filters ..... thanks~ Rachel W.