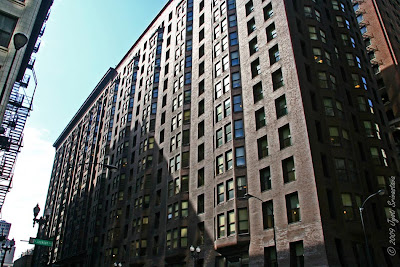 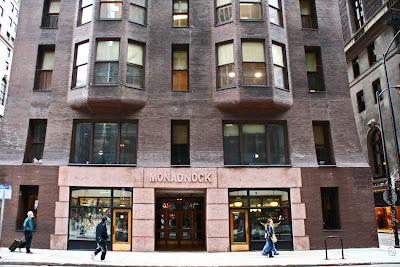 Here's some information from it's official site .. Monadnock .. click here ..
"The North half of the Monadnock was John Wellborn Root’s last and boldest design. Root caught pneumonia and died at the age of 41, while the building was under construction. At the time of his death, in addition to running Chicago’s largest architectural practice, John Root and Daniel Burnham were responsible for the design and construction of the World’s Columbian Exposition, which was to open the following year. Root’s death forced Burnham to concentrate his energies on the Exposition, so when the north half of the Monadnock rented quickly and its owners decided to build the south half right away, they commissioned another firm to design it: Holabird & Roche, the second largest practice in the City.

The two halves of the building are similar in scale and color, but quite different in style. The north half is often called a fountainhead of modern architecture because of its total absence of exterior ornament. Root evidently felt that all that was needed here was graceful form for the structure itself. The south half of the building, on the other hand, is a masterful early application of classical architectural principles to the design of a tall building." 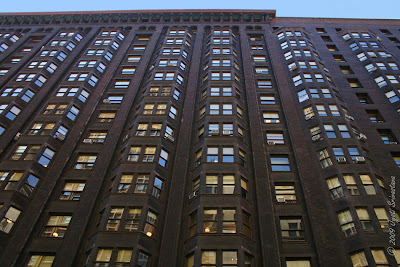 The north part: famed for its lack of traditional ornamentation--is a masonry, wall-bearing structure, the last skyscraper to employ this method of construction, with six-foot thick walls at the base.
The south addition, on the other hand, is an early example of steel-frame construction, its underlying structure revealed through narrow piers and wide windows.
Together, they mark the end of one building tradition and the beginning of another. 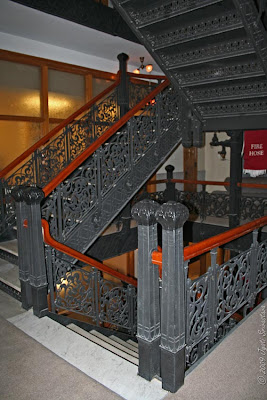 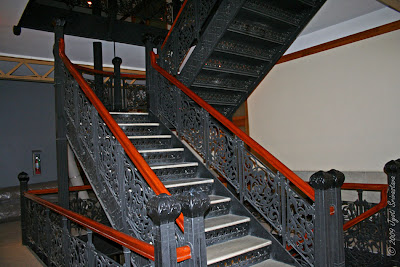 An elaborate iron staircase runs up the middle of the north building, right through the lobby and the office floor hallways..

Interesting, yes? The building has both the "end of one building tradition and the beginning of another." While Mr. Root wasn't able to finish his own masterpiece, he still has inspired other architects through this building, with the next firm weighing some modern designs. The iron staircase looks classy. I wonder if there are lots more intricate steel and metal works inside and outside the building.