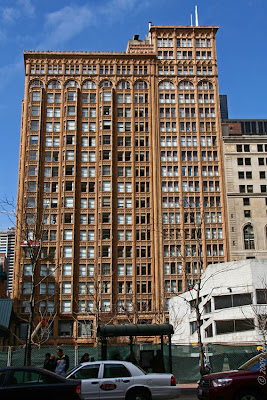 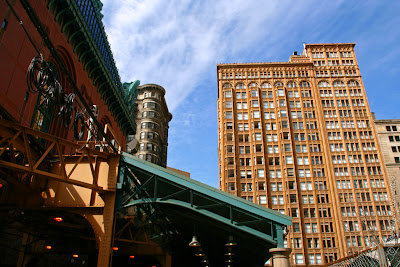 The plaque reads:
"Chicago Landmark
Fisher Building
D.H Burnham & Co. architects
1896
A remarkable light and open facade enlivened by terra-cotta fish, eagles, salamanders, and other ornamental forms makes the Fisher building an original and fanciful design within the tradition of Chicago school. The taller 1907 addition to the north repeats most elements of the original design.
Designated a Chicago Landmark: June 7, 1978
By the City Council of Chicago.
Michael A. Bilandic, Mayor
Commission on Chicago Historical and Architectural Landmarks."

It was built for the paper industry magnate Lucius G. Fisher. The original building was completed in 1896 by D.H. Burnham & Company. It was 18-story high. In 1906, an addition on the northern side of the building raised it from 18 to 20 stories. The addition was made by Peter J. Weber, a former employee of the Burnham firm. To this day, the Fisher Building is the oldest 18 story building in Chicago that has not been demolished. The Masonic Temple, which was taller and older, was demolished in 1939.

As a visual pun on the name of the building's original owner "Fisher", various aquatic creatures and seashells are carved at the base of the building. In addition, eagles and mythical beasts decorate the upper stories. 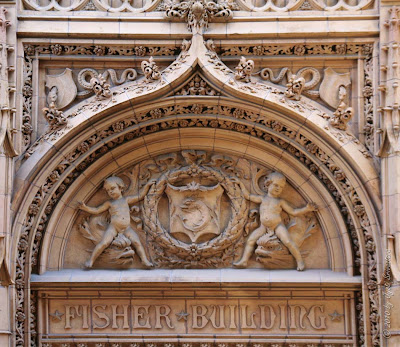 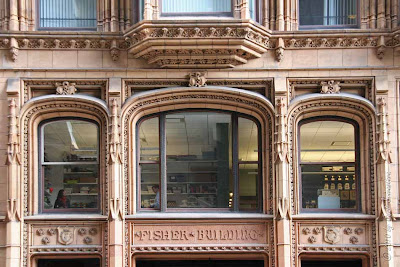