The Rookery: The Light Court [By John Wellborn Root] 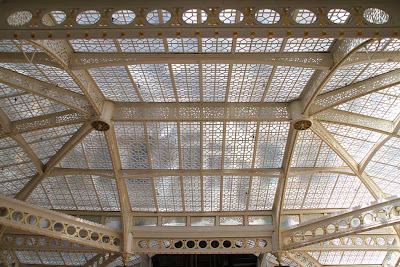 The Rookery was constructed at a time, when gas lamps were still in use, although electricity was getting increasingly popular. But it was very expensive. So Burnham & Root's plan inculcated ways to access natural light and air-ventilation in the building.. The facade was so designed, that the base had round granite columns, which allowed large expanses of windows. The lower floors were almost a continuous curtain-walls of glass. These elements allowed for more natural light. 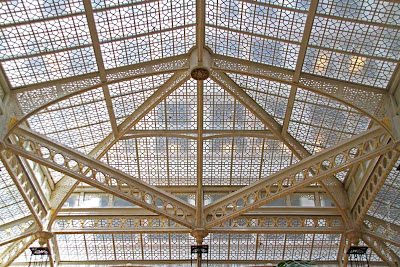 The Light Well and Light Court..
Inside the building, a central well provided light to offices. At the bottom of the central light well is one of The Rookery’s most impressive feature, the Light Court. A wrought and cast iron frame created the airy, bird-cage-like feel. The mezzanine floor was comprised of glass blocks that transferred light to the lower level. Elaborate, hand-laid mosaic tile covered the main floor.

As much as I want to see the original Light Court by Burnhamn & Root, it's not possible, as the Light Court now stands renovated by Frank Llyod Write and William Drummond. The Rookery's website has a picture taken in 1890, Light Court..click here & scroll down..

During the late 1980's renovations, architects discovered many of Root's original works..
- original iron columns
- original mosiac fragments
They decided to leave samples of these open for visitors to see and compare.. 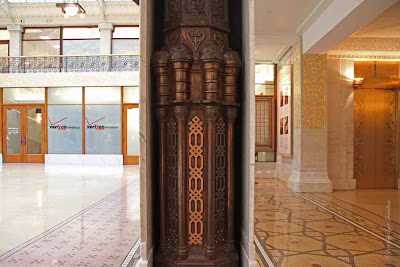 Original iron columns..
In the above images, the encased iron columns are from the original design. The white marble around it with gilded and incised motifs are Wrights renovation..

As a part of the renovation, in 1992, a skylight was installed at roof level to protect the light court’s ceiling and the light well.
Also, Burnham and Root's office on the 11th floor was renovated and is now the Burnham Library..