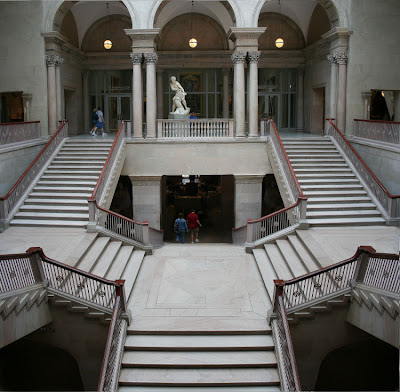 The Michigan Avenue entrance leads to the Grand Staircase.. and takes us to the Upper Level where European arts are exhibited.. The Art Institutes collection of European Art is considered one of the finest in the world, with more than 3,500 works dating from the 12th through the mid-20th century..
The West Wing, has European Art before 1900..
The East Wing, the upper-level of Alsdorf Galleries, features Impressionism and Post-Impressionism Art..
Although Contemporary Art is in the Modern Wing..

I begin with Impressionism..
Some name associations are well established, like the name Monet with waterlilies, Degas with ballerinas and Van Gogh with sunflowers. For me, this is all I knew about "Impressionism." I had never really seen an "original" impressionist painting.. Well, all this ended with my first visit to the Art Institute of Chicago, which happened few years back in about 2005. I remember how happy I was seeing the real deal, the colourful canvases painted by the grandmasters themselves, not the print. This poignant experience initiated an insatiable quest of learning about various schools of arts, the various "isms".. Impressionism, Post-Impressionism, Fauvism, Cubism, Dadaism, Surrealism, Expressionism, Abstract Expressionism, Modernism and so it goes.. And it all begins with Impressionism..

“Impressionism” as a major art movement developed chiefly in France in around 1860 to 1890, as a reaction against the then popular “Academic Art”. Academic Art is typified by large, formal paintings depicting grand biblical, mythological and historical event. Impressionist choose informal outdoor subjects, scaled down the size of the work and used loose noticeable brush strokes, that contrasted with the minute brush techniques favored by the traditionalists. It was developed by a group of artists who knew each other, Claude Monet, Pierre Auguste Renoir, Alfred Sisley, Paul Cezanne, Edgar Degas, Berthe Morisot, Gustave Caillebotte.

Salient Features;;
- The most significant departure from the dictates of Academy was in “content”. Against the academic subject-matter of historic events, religious themes or portraits, the Impressionists looked at the world around them for their subject matter – rural scenes, city-life, peasants, working-class men, nature..
- Short “broken” strokes of pure unmixed colors. The brushstrokes became a visible part of the composition, as opposed to the then prevalent academic technique of having almost smooth surface on canvas. Emphasis was on the overall effect rather than upon details.
- They began painting outside the studio. In the former era of Acadamic Art artists had sketched or done watercolor outside. However traditionalists could not paint canvases outdoors as the painting process was very time-consuming. However, the Impressionists painters began moving out of the studio into the nature. They worked “en plein air” [outdoors]
- Captured the momentary and transient aspects of sunlight..

Although"impressionists" artists had many common elements in their paintings, yet each one of them had their own distinctive style & subject-matter.
- Claude Monet began a “series” painting of one subject in varying lights and viewpoints. His series of paintings of haystacks [snow effect, end of summer, at he sunset] are in the Art Institute of Chicago. Monet was fond of painting nature, water lilies, gardens, ponds & bridges..
- Edgar Degas, specialized in painting ballerinas, horses & portraits..
- Auguste Renoir, specialized in painting women, children & lush landscapes..

The name associations still exsits, only the understanding is a bit deeper and most importantly, now I've seen them!