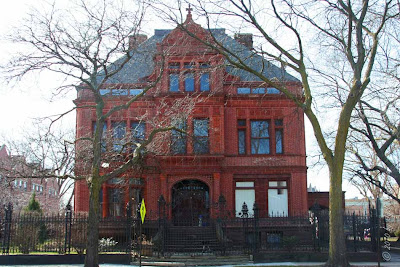 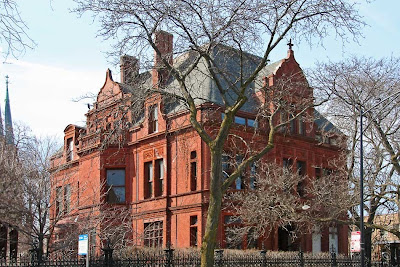 It's always a pleasure to see a beautiful building like this in an unexpected place.. And a bonus is to learn that it's by the firm Holabird and Root and that it's design is said to be a precursor to wide window openings in the firm's later works as Rookery and Monadonock!

The plaque reads..
Chicago Landmark..
Sidney A Kent House
Burnham & Root, architect
1883
The generous window openings and the sculpted qualities of the materials are a precursor to the firm's later works such as Rookery and Monadonock buildings. Built for one of the founders of the Chicago Union Stock Yard Company, this is one of the few remaining mansions on this section of South Michigan Avenue. The second owner was John "Bet A Million" Gates, who was as well known for his gambling exploits as for his business skills in the barbed wire industry.
Designated on March 18, 1987
Harold Washington, Mayor
Commission on Chicago Landmarks..
Posted by Jyoti at 3/30/2010 07:33:00 AM

I love this house too and am interested in much of the architecture in the old "millionaire's row" in this area. One slight correction, there is a note under the pictures that states that this is a Holabird and Root building. This should state that it is a Burnham and Root building. Just a very minor item, but thought I should mention. I would love to be able to see pictures of the interior if still preserved

Much of the 1st floor has been preserved. Also on the North face of the building there is an incredible stained glass window.

i believe a person lives their now, but I am sure that the inside is still somewhat reserved.