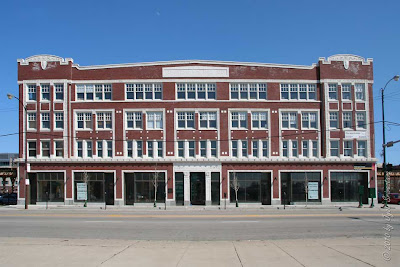 The plaque reads..
Chicago Landmark
Overton Hygienic Building
Built 1922-23
Built as the headquarters for the Overton Hygienic Company, one of the nation's foremost producers of African-American cosmetics,this structure also housed the Victory Life Insurance Company and Douglass National Bank, the first nationally chartered, African-American-owned bank. Offices on the second floor were rented to area physicians, lawyers, music producers, and architects. It is one of nine structures in the Black Metropolis-Bronzeville Historic District.
Designated on September 9, 1998
Richard M. Daley, Mayor
Commission on Chicago Landmarks..
Posted by Jyoti at 3/23/2010 05:21:00 PM