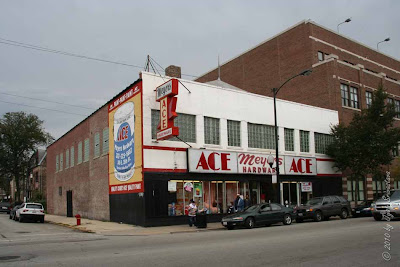 It's city's earliest and most legendary jazz venues. it was originally built in 1909 as an ordinary automobile garage. In 1921, Edward Fox and Sam Rifas, remodeled the garage, and opened it as "Sunset Cafe". It was a white-owned black-and-tan cabaret. The cabaret was managed by Joe Glaser, who later became Louis Armstrong's manager. Soon Sunset Cafe became an important jazz venue. It featured famed musicians as Louis Armstrong, Cab Calloway, Johnny Dodds, and Earl "Fatha" Hines. Many promising young artists, including Bix Beiderbecke, Jimmy Dorsey, Benny Goodman, and Gene Krupa, got their start at late-night sessions here. It was remodeled again in 1937 and renamed as the Grand Terrace Cafe. It remained a popular night club until 1950. It later housed the office of the Second Ward Regular Democratic Organization and became a hardware store in the 1970s. It is one of nine structures in the Black Metropolis-Bronzeville Historic District.

The name of Sunset Cafe is closely associated with that of Louis Armstrong.. He was born in New Orleans and came to Chicago in 1922. Armstrong recorded his first record "Hot Fives" at Sunset Cafe..
Posted by Jyoti at 3/22/2010 04:12:00 AM