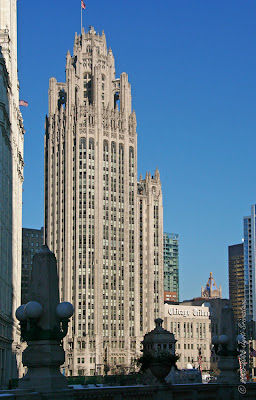 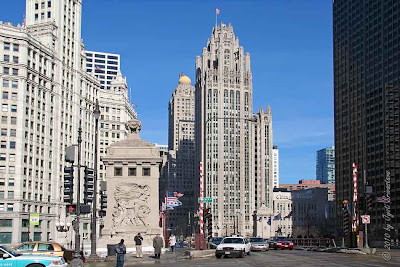 The Tribune Tower is the headquarters of Tribune Company, founded in 1847. The Tribune Tower was erected in 1925. The Tower design was the result of an international competition for "the most beautiful office building in the world," held in 1922 by the Chicago Tribune newspaper. Tribune offered $100,000 in prize money [$50,00 for first place, $20,000 for second and $10,000 for third] In all, 263 designs were received from the United States and 22 from other countries. Entries were presented anonymously. The winning design was of a soaring Gothic skyscraper awarded to New York City architects John Mead Howells and Raymond M. Hood.

The Tower's frame is made of steel, fireproofed with concrete. The outer walls are Indiana limestone in variegated shades of gray. The Tower's Gothic design emphasizes the vertical lines, creating the illusion that the building soars well above it's 36 stories.

The plaque reads..
Chicago Landmark..
Tribune Tower
John Mead Howells and Raymond Hood, architects
1925..
This design was the result of an international competition for the most beautiful office building in the world, held in 1922 by the Chicago Tribune. The competition proved extremely influential for the development of skyscraper architecture in the 1920's. The crowning tower, with it's flying buttress, is derived from the design of the French cathedral of Rouen and gives the building a striking silhouette.
Designated in Feb.1, 1984
Richard M. Daley, Mayor
Commission on Chicago Landmarks..

Hall of Inscriptions...
The soaring entrance area is known as the Hall of Inscriptions. Carved into the walls are famous quotations expressive of ideals and obligations of the press. Inscriptions record the words spoken by visionaries and great leaders such as Patrick Henry, Voltaire and Benjamin Franklin.
# For more.. click here..

Aesop's Stone Screen..
By Rene Paul Chambellan..
The three-story arched entrance is so overlooked. The detailed stone screen depicts characters from Aesop's fables.. Like Crow and the Pitcher, Wolf & the Crane.. Something that I read, but could not figure out [still worth mentioning here].. The screen has figures of Robin Hood and Howling Dog, which are visual allusions of the architect's names.. [Hood and Howell]
# For more.. click here..

Stones and Artifacts...
The Tower's exterior limestone walls are studded with more than 150 pieces stones and artifacts from around the world. It includes fragments of Abraham Lincoln's original tomb, India's Taj Mahal and China's Forbidden City. Some of Tribune Tower's Stones are from structures that predate the Christian era, such as the Great Pyramid of Cheops in Egypt or the Great Wall of China. Others like the Berlin Wall is of recent history. Every state in the nation has at least one bit of natural or man-made wonders here.
# For more.. click here..

Grotesques & Gargoyles..
Designed by Rene Paul Chambellan..
The sculptural ornamentation is worth stopping and taking a second look! Its gargoyles and corbels are some of the most amusing that I've seen.. The details are not to be missed.. If only I knew what they stood for.. Or does anyone has any information?
# For more.. click here..

Nathen Hale Lobby..
To commemorate the 150th anniversary of the Chicago Tribune in 1997, the Tower's Nather Hale lobby was renovated and inscriptions were added to include words of Abraham Lincoln, playwright Arthur Miller and former Supreme Court Justice Thurgood Marshall.
# For more.. click here..