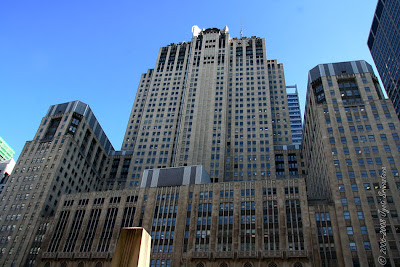 The building's art-deco style facade, faces the Chicago river ... and is shaped like an enormous armchair, with it's back towards the east ...
# its 12-story "seat" is the opera house,
# its 22-story "arms" are office annexes, and ..
# its 45-story "back" is the office tower. 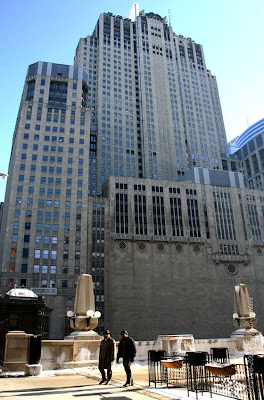 It's sometimes referred to as "Insull's Throne" ... It has been rumored that Insull designed the building in the shape of a throne upon which his daughter could figuratively sit as star of the opera. Having been rejected by the New York Metropolitan Opera, she could sit with her back facing eastward toward New York City.

The two story corridore and monumental pedestrian colonnade which face Wacker Drive, are appropriate to the style and use of a grand opera house.

Image on the left shows the magnificient two-story corridor, facing the Wacker Drive ... Whereas image below and the above two images are the view facing the Chicago River ... 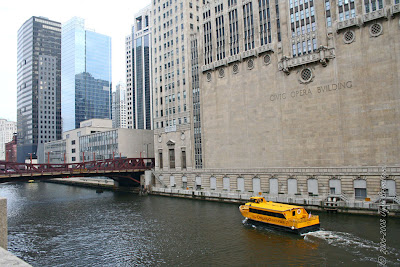 The opera house underwent a major renovation in 1993 when it was purchased by the Chicago Lyric Opera, which had previously rented the space. The chairs were repainted and reupholstered, the carpeting replaced, and the gilt paint completely re-stenciled. The massive project was completed in 1996.