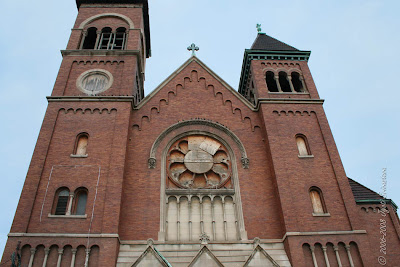 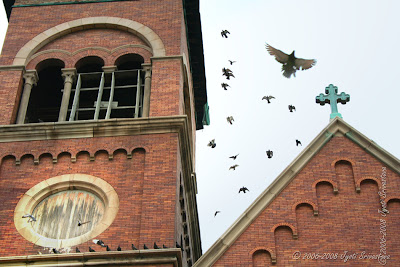 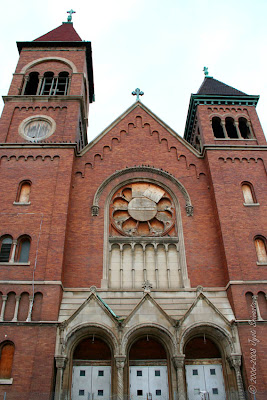 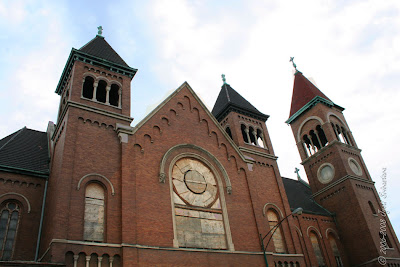 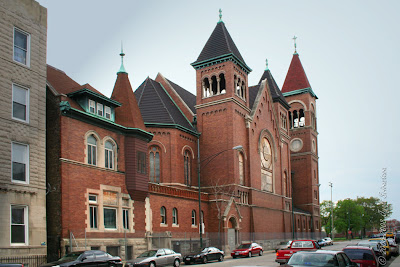 In the mid-80s I visited St. Boniface and was immediately struck by the beauty and intimacy of its design. Around that time I also visited another of Schlacks' masterworks, St. Basil on Garfield Boulevard. Although St. Basil was built on a grander scale and in the Byzantine Revival style, you could see the same master's hand at work. These quickly became two of my favorite churches in the city.

Both St. Basil and St. Boniface closed around the same time, a heartbreaking but inevitable decision by the Archdiocese given their dwindling congregations.

Sadly, St. Basil was demolished about ten years ago.

My heart goes out to everyone whose lives are intimately connected to the churches all over city that have been lost.

By the way, I really like your photographs of St. Boniface, especially the one of the pigeons in the belfry!

I went to this school in 40's and 50's for the full 8 yrs. Was married
in the church in Jan. of 70. It was
a beautiful church in a nice Polish
neighborhood.

I have searched the net high and low for pictures of St. Basil's on Garfield Blvd. I was baptized there and had first communion there. In 1959 we moved to the farther south suburbs, St Christina parish. I also remember a friend in the 1980's who had a book of older Catholic Churches in Chicago. It had pictures of the inside of St. Basil's. Any suggestions where I might look? I did find a postcard drawn image of St. Basil's, but that's it.

Heavenly City: The Architectural Tradition of Catholic Chicago. It's supposed to have pictures.

I now live in Denver - where they scrape anything with architectural significance and beauty in favor of low rent developers.....but I called Chicago my home for 25+ years before moving. Chicago has always been known for its amazingly diverse and protected architecture. My hope is that the City sees the wisdom of denying the Catholic Church a permit to tear down such a beautiful building. How is refurbishing this Church outside of the Church's expansive wallet? And why can't the Church simply sell it to another party who is willing to restore it? I hope the City asks these questions and realizes the Church has some other motivation here and it isn't in the best interest of the local neighborhood and the City of Chicago.

St. Boniface is one of the most beautiful old churches in Chicago. The same plan to demolish the church was prepared for St. John Cantius, but one man with the vision and volunteers help, saved this treasure. If St. Boniface disappears, it would be shame for Archdiocese of Chicago. Once demolished would be gone forever.