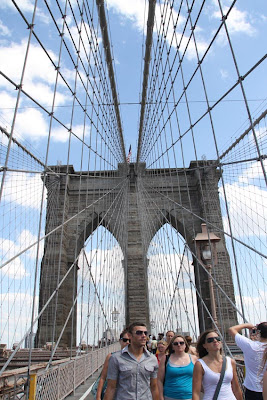 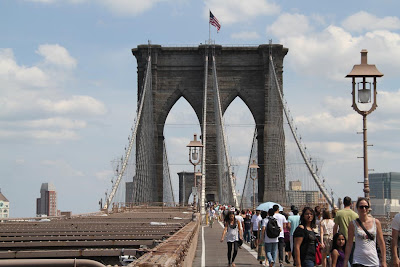 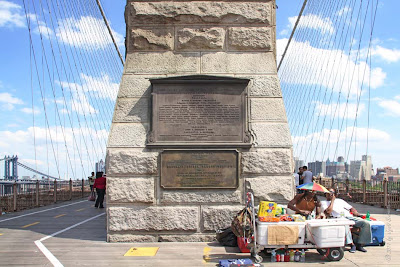 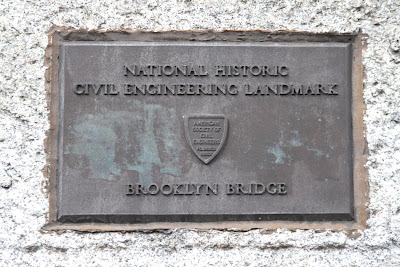 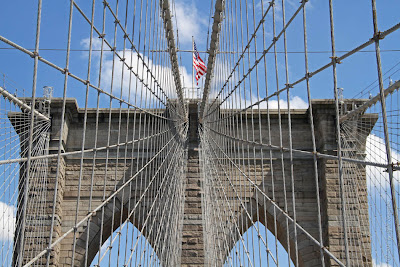 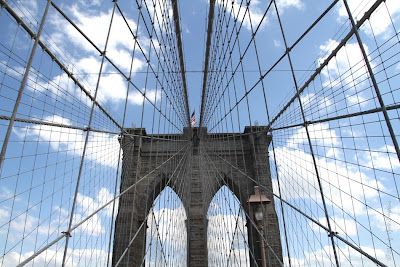 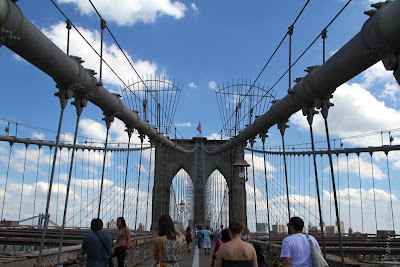 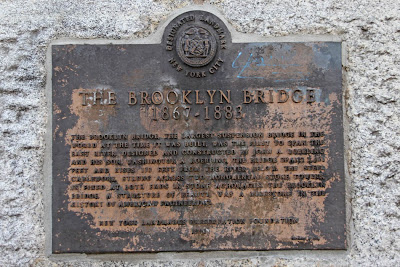 The Brooklyn Bridge, 1867 - 1883..
Inscription...
The Brooklyn Bridge, the largest suspension bridge in the world at the time it was built, was the first to span the East River. Designed and constructed by John A. Roebling and his son, Washington A. Roebling, the bridge spans 3,461 feet and rises 133 feet from the river below. The steel cablework, strung across two monumental stone towers, is fixed at both ends in stone anchorages. The Brooklyn Bridge, a structure of beauty, was a milestone in the history of American Engineering.
Erected 1991 by New York Landmarks Preservation Foundation.. 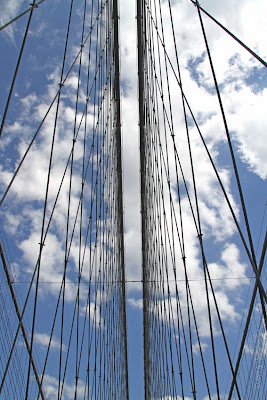 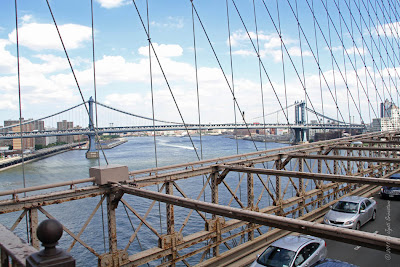 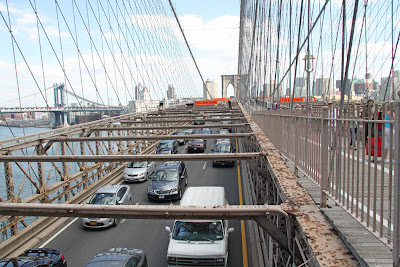 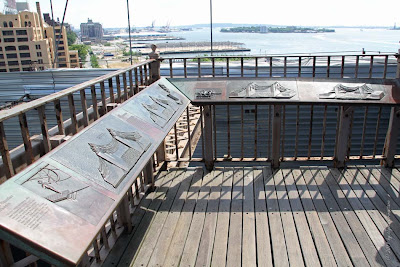 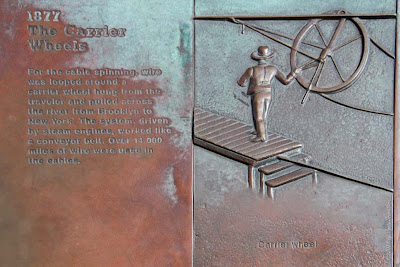 1977 The Career Wheels..
Inscribed..
For the cable spinning, wire was looped around a carrier wheel hung from the traveler and pulled across the river from Brooklyn to New York. The system, driven by steam engines, worked like a conveyor belt. Over 14, 000 miles of wire were used in cables. 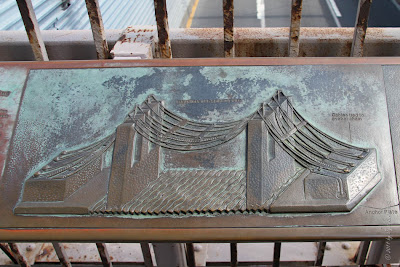 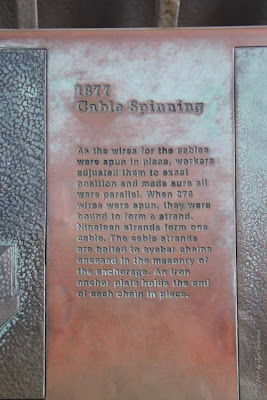 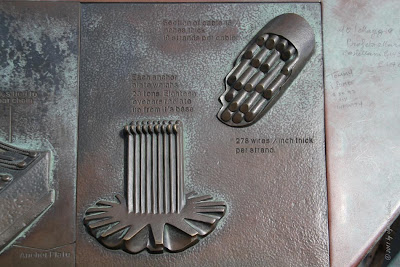 Inscribed..
Section of cable 15 3/4 inches thick. 19 strands per cable.
Each anchor plate weighs 28 tons. Eighteen eyebars radiate up from it's base. 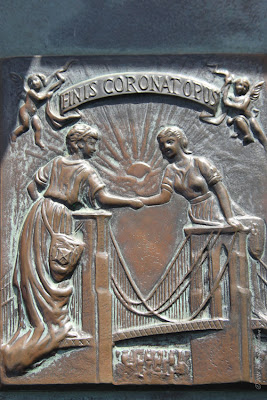 Finis Coronat Opus..
Latin for "The Finish Crowns the Work"..
[commemorates the opening of the bridge linking the cities of New York and Brooklyn in 1883] 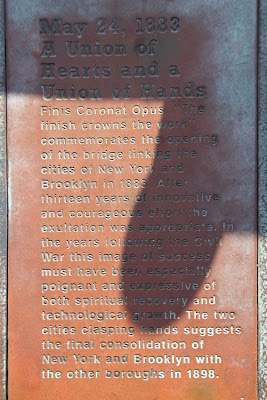 Inscribed..
May 24, 1883..
A Union of Hearts and a Union of Hands..
Finis Coronat Opus, "The Finish Crows the work", commemorates the opening of the bridge linking the cities of New York and Brooklyn in 1883. After thirteen years of innovative and courageous effort the exeultation was appropiate. In the years following the Civil War this image of success must have been especially poignant and expressive of both spiritual recovery and technological growth. The two cities clasping hands suggests the final consolidation of New York and Brooklyn with the other boroughs in 1898. 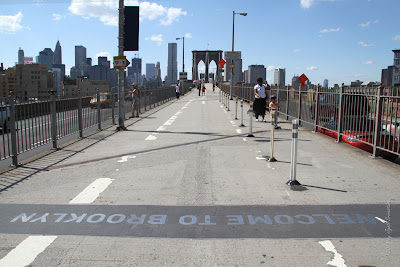 Yes reached the other side, with "Welcome to Brooklyn" sign.. 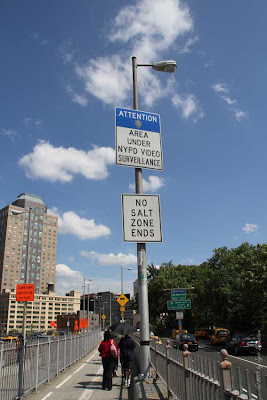 The bridge is apparently a "No Salt Zone"..

Crossing Brooklyn Bridge was one of the high points of my New York trip.
It was June 26, 2011..
Took approx 30 minutes..
stopping at various points, to enjoy the view! 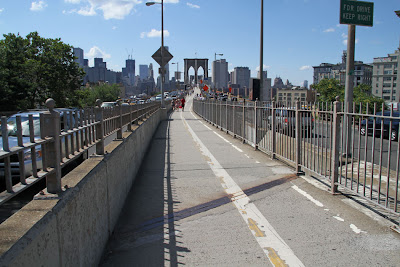 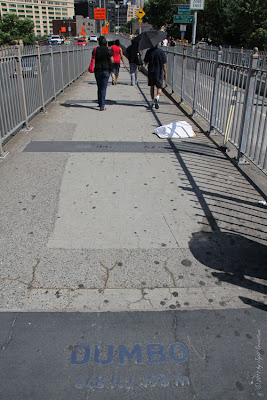 Enter historic Dumbo, borough of Brooklyn,
neighborhood of New York City, New York..
Dumbo, an acronym for Down Under the Manhattan Bridge Overpass.. 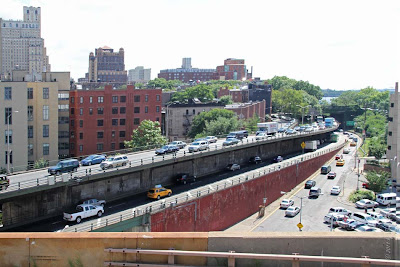