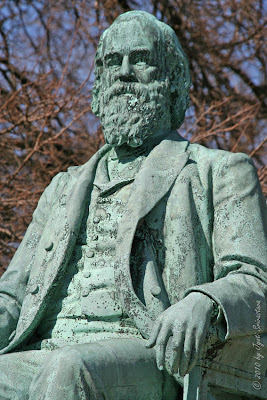 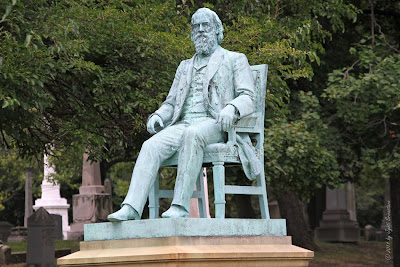 Charles J. Hull [1820-1889] was wealthy real estate developer and one of Chicago's pioneer citizens. He is best known today his Halsted Street mansion. The house, built in 1856, was leased in 1889 to social reformer Jane Addams (1860-1935), who later acquired much of the surrounding neighborhood as well. "Hull House" was a settlement house, providing housing and education to new immigrants for over forty years. Jane Addams received the Nobel Peace Prize for her work.

A strange story became associated with Hull House in the 1920s, particularly among Italian immigrants. Supposedly, a young woman was pregnant when her husband swore at a picture of Christ. As punishment, the baby was born with horns, a tail, and cloven hooves. This "devil-baby" was given over to Addams and kept in the attic of Hull House. People came from miles around to see the "devil-baby", only to be turned away at the door with the news that no such creature existed at Hull House. This story eventually inspired the film Rosemary's Baby. 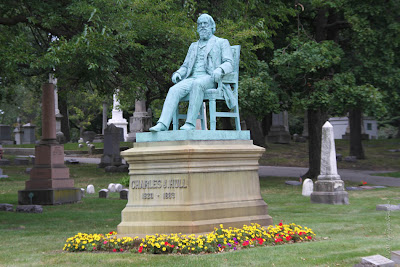 Jane Addams eventually talked Great-great Uncle Charlie into giving her the Hull House to atone for questionable actions in his life.

Charles Hull was quite a reformer in his own right. He was a philanthropist of his time, an ardent abolitionist, and he thought he could help people even through his chosen profession of real estate. He went down to the South after the Civil War, bought up land from bankrupt plantation-owners, and sold it to former slaves for insanely fair and affordable rates. He thought property ownership gave someone a foothold in society, and provided a route to prosperity and equality. He thought African-Americans deserved the opportunity to support themselves.

In the Chicago area he did a wide variety of work. He was active in the Unity Church congregation of Unitarians under Robert Collyer (also an abolitionist). He advocated for prison reform, and helped prison inmates by providing job training skills a sustaining life after they left the justice system. Notably, wood-carving was a popular route to success for these people re-entering society. The wood-carvings in the Hull Home, the decorative trim around the doorways, was produced by these inmates trained and paid for their handiwork.
Hull was wealthy, but thought his wealth should go to someone who deserved it, and to the wider good. Rather than his closest relatives, he gave his inheritance to his business partner, his cousin Helen Culver, who had proven herself a shewd and conscientious worker. The inheritance, the real estate business, and the property came with the caveat that a large portion of the proceeds go to help the unfortunate in society, and to expand rights and equality. Culver gave the Hull-Home to become the settlement house as only one tiny piece of the amazing philanthropic work she was a part of in her life too. She supported women's education and built multiple buildings on the University of Chicago campus. She donated much land and money to the growing Hull-House settlement, and continued her cousin Hull's efforts to provide true democratic opportunity through land ownership. Her grave is also in Roseland Cemetery.