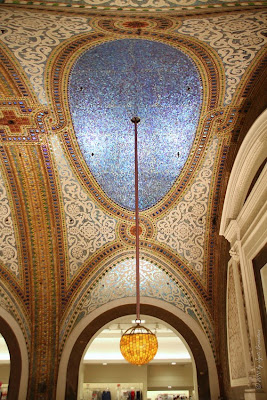 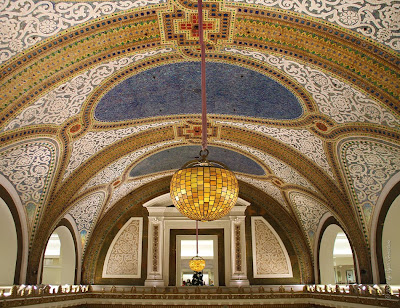 The name of Tiffany is closely associated with..
- The creation of "favrile" glass, patented by Louis C. Tiffany in 1894..
- Developments in stained glass techniques, especially drapery glass..
- Not only is the Tiffany Studio, credited with innovative techniques, but also brought changes in the theme of stained glass windows, from religious compositions, to pastoral scenes, ornamental designs and also floral motifs. 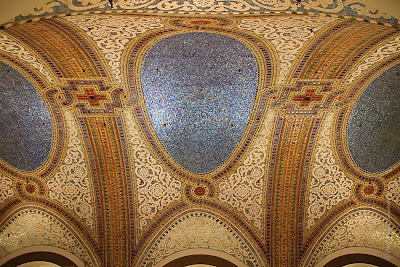 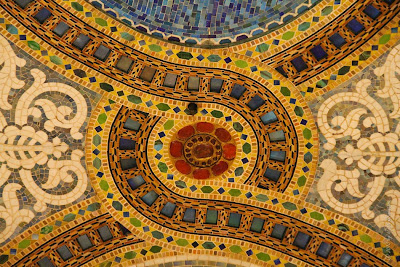 Tiffany Dome at Marshall Fields [now Macy's] at State Street..
Installed: 1907
Designed by Louis C. Tiffany
It is both the first dome to be built in favrile iridescent glass and is the largest glass mosaic of it's kind. It contains over 1.6 million pieces. The late Louis C. Tiffany designed this glass mosaic dome. "Favrile" glass are handmade and the "iridescent effect" was obtained by mixing different colors of glass while hot. "Favrile iridescent glass" is a type of art glass patented in 1894 by Louis Comfort Tiffany... 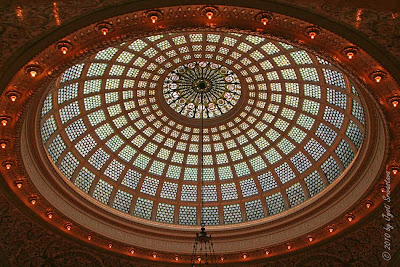 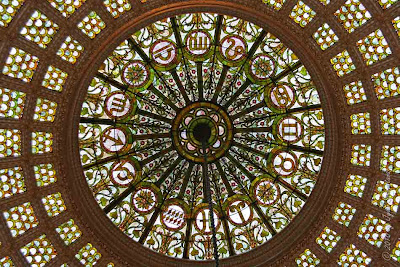 Preston Bradley Hall..
Chicago Cultural Center..
The centerpiece is a 38-foot Tiffany glass dome designed by artist J. A. Holtzer. The Cultural Center states this to be the largest Tiffany dome in the world, with an estimated value of $35 million.. 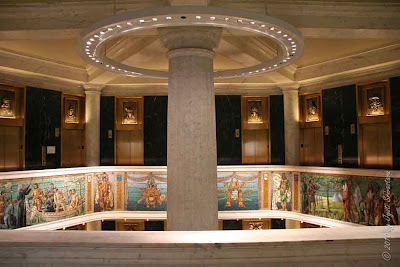 The lobby of Marquette Building..
The mosaics are the work of Louis Comfort Tiffany and J.A.Holzer.. Holzer was chief designer for the Tiffany Glass and Decorating company. These mosaics are composed entirely of mother of pearl and Favrile glass.. 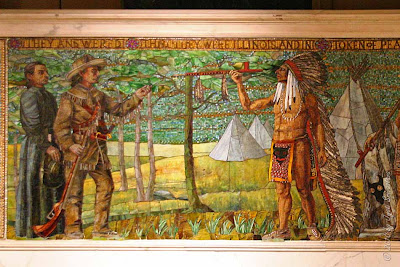 The lobby of Marquette Building..
Words inscribed.. They answered they were Illinois and in token of peace presented the pipes to smoke.. 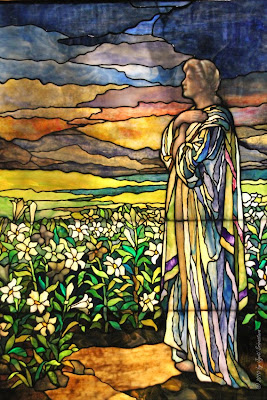 Field of Lilies..
Designed, Fabricated by Tiffany Studio..
Location: Tiffany Gallery, within the Smith Museum of Stained Glass Windows at Navy Pier..
Louis Comfort Tiffany was not satisfied with brushwork on glass.. "Glass covered in brushwork produced an effect both dull and artificial".. He said.. "I could not make an inspiring window with paint. I had to use a medium which appealed to me.. How many times I have tried to make drapery glass? My chemist and my furnanceman for a long time insisted it was impossible, claiming that the metallic oxides would not combine, and that was the trouble for many years. The mix would disintegrate. New styles of firing ovens had to be built, new methods.. for annealing glass.." 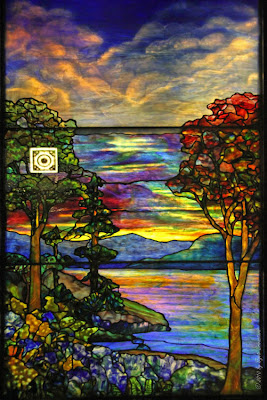 Autumn Landscape [1890s]..
This window is from Tiffany's Impressionist period. Selected sheets of Favril glass are combined into a sky as "impressionist" as one produced by the painters. The window appears even more spontaneous because of the light that is transmitted through it, a uniqueness of glass unknown to the painters on canvas. 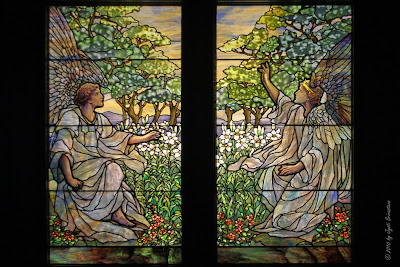 The marker reads..
All the various glass inventions of Louis Comfort Tiffany can be studied in this superb pair of angels. Angels seated in the fields of lilies indicate divine purity. This symbolism is carried to a thoughtful conclusion by the angels beautifully feathered white wings and drapery-folded garments. The use of pastel colors contribute to the serenity. As with all Tiffany figurative windows, the exposed faces, hands and feet are painted.. 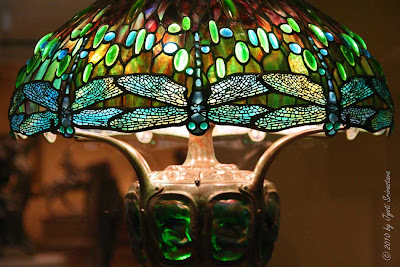 Hanging Head Dragonfly Shade on Mosaic and Turtleback Base..
at the Art Institute of Chicago..
Design attributed to Carla Pierce Wolcott Driscoll of the Tiffany company..
Description: 1906 / Favrile glass and bronze..

The marker reads..
Around 1898 Louis Comfort Tiffany's firm began creating lamps fitted for electricity with trademark Favrile glass, which feature subtle shading and unique textural effects. As artistic director, Tiffany approved all patterns but designed relatively few lamps himself. Clara Driscoll, head of Women's Glass Cutting Department at Tiffany Studios, was likely responsible for design of this shade and base. She began working for Tiffany in 1888, and designed the majority of the firms lamps until she left the company in 1908 or 1909. 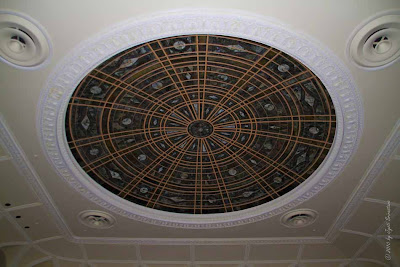 Stained glass dome at Fullerton Hall..
Designed by Louis Comfort Tiffany..
Completed: 1901.
at the Art Institute of Chicago..
In 1901, the Fullerton Hall's pendant space, the Ryerson Library was completed as well.. 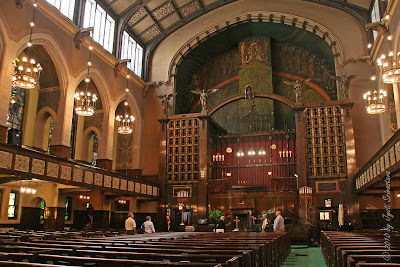 The Second Presbyterian Church has an amazing collection of stained glass windows by Tiffany. But I need to go there again for closer images of the windows..
Posted by Jyoti at 10/23/2010 04:50:00 AM

Very beautiful! We need to get back to doing work like this again (in architecture as well as in the decorative arts).

It is amazing, and we will never forget once visit this place

@ tovangar: And you must also read the caption, which specifies, Tiffany in "Chicago"!!!