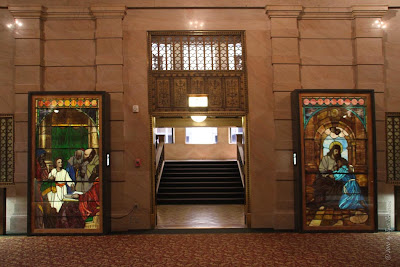 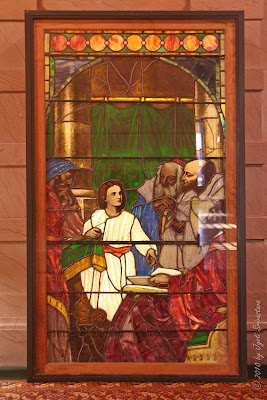 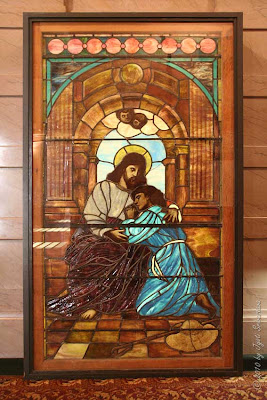 Stained Glass Windows..
attributed to Tiffany Studio
Removed from St. Colman's Church, Turtle Creek, Pennsylvania
Chicago public Library Special Collection Division..
The marker reads..
Louis Comfort Tiffany [1848-1933] founder of Tiffany Studio in Long Island, New York, began his career as a painter. He began experimenting with the use of glass as an art form after founding in 1879 Louis C. Tiffany and Associate Artists, a complete home decorating firm. Tiffany Company eventually became primarily of glass works, including windows, such as the once shown here, lamps and blown glass items. His glass creations are known for their use of innovative techniques, including his invention of iridescent glass and drapery glass, the later term coined to describe his sophisticated approach to the depiction of fabric folds. Tiffany disliked the use of paint on glass, preferring to create the desired effect by manipulating the glass itself. the only exception he would allow was the painting of faces, arms and legs. these windows from Colman's Church show signs of paints having being applied to their faces- and it must be assumed that this overpainting was not done at Tiffany Studio..

Just a note: It's not Coleman, with an "e." It's Colman. Hope it's not misspelled on the plaques.