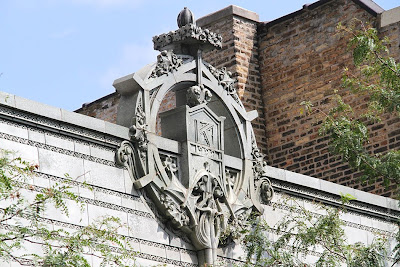 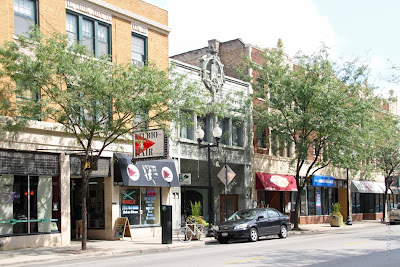 Chicago Landmark..
Krause Music Store
William Presto, architect
Louis Sullivan, associate architect
1922..
The facade of this small building was Louis Sullivan's last commission, and it reflects the careful attention to detail that characterized Sullivan's work. Elaborate terracotta ornament, projcting above the roofline and frame the large display window, draws attention to the store and to it's contents.
Designated a Chicago landmark on Sep 26, 1977
by the City Council of Chicago
Michael A Bilandic, Mayor
Commission on Chicago Historical and Architectural Landmarks..

William P Krause was a successful music salesman, and he wanted to build a storefront worth attention. He hired William C. Presto as the architect. However, Presto had earlier worked with Sullivan for designing the Framers and Merchants Bank, in 1919. He recommended Sullivan to complete the job. The project became Sullivan's last project. 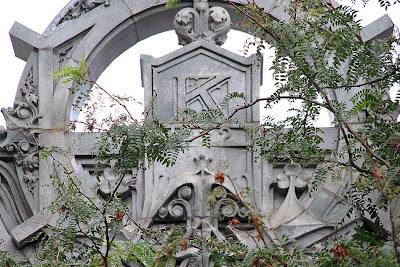 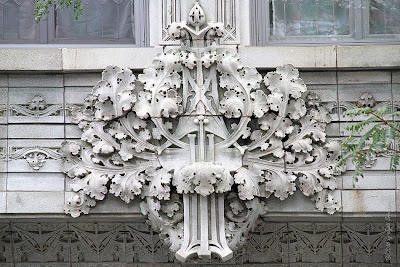 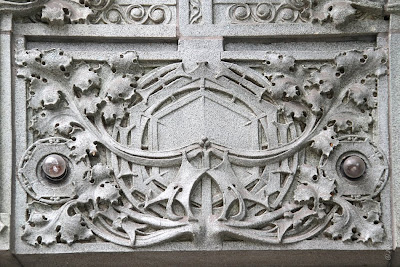 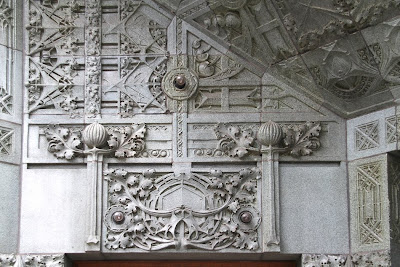 Above are some of the ornamental details of the Krause Music Store.. By 1922, when Krause Music Store was commissioned, Sullivan's style was no longer in vogue. The taste had changed in favor of the Beaux-Arts style of architecture. In his ill-health and living in a rented room, Sullivan began writing "The Autobiography of an Idea", and working on a series of drawings. It was during this period of reflection on his life and career that Sullivan accepted the Krause commission. The design illustrated that he still possessed an astonishingly moving artistic talent.
[Ref: Louis Henri Sullivan: Krause Music Store].. 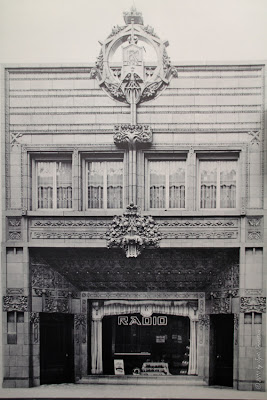 The above image is from the exhibit "Louis Sullivan's Idea", at the Chicago Cultural Center [June 26–November 28,2010] has some interesting information on it. Initially fearing that Sullivan would reject the modest project, Presto found him pleased and grateful to have the work. To help ensure the project would be built, the terra cotta company supplied the material without markup at the cost of $3,770..

Neglect and Restoration.. And Awards..
Talking about Krause Music Store, one has to mention it's neglect and amazing restoration..
In 1929 Krause died, and the property was initially rented and eventually sold to a funeral company. For the next six decades, the Krause building served as a funeral parlor and underwent much neglect and alteration to its windows, doors and façade.

Lots of credit goes to it's current owner Studio V Designs for it's restoration.They hired preservation architects McGuire Igleski & Associates for the restoration. A second architect was hired to adapt the commercial interior for use as the new home of Studio V Design. The architectural firm of Wheeler Kearns designed the new office.

The project has received a number of awards for its historic restoration and adaptive reuse. It has been honored by..
- The American Institute of Architects with a Crombie Taylor Honor Award,
- Landmarks Illinois with a Richard H. Driehaus Foundation Award,
- The City of Chicago with a Landmarks Preservation Award, and..
- The National Park Service added it to the National Register of Historic Places.

* Anecdote..
Driving in Lincoln Park area, with six-way intersections, is no joke, at least for me!! Thanks to Jennifer Dickson.. for navigating my way through those complicated streets.. And discovering Krause Music Store was purely a lucky coincidence. I wanted to see it, but before I could enter the address in my GPS, she spotted it anyways, just driving down the streets..
Posted by Jyoti at 9/03/2010 03:41:00 PM